Notice to the Campus Community:

The John Lewis Student Center and Stamps Commons will be closed Saturday, Dec. 3 from 6 a.m. to 3 p.m. for scheduled maintenance.
During this time, meeting rooms will be unavailable for use until 3 p.m. The Post Office and all dining services will remain closed for the day. We apologize for any inconvenience this may cause.

History of the Student Center

Over the past 50 years, the Georgia Tech Student Center has undergone many changes that reflect the growth of the campus community. Learn about the original building and the Campus Center Project below. 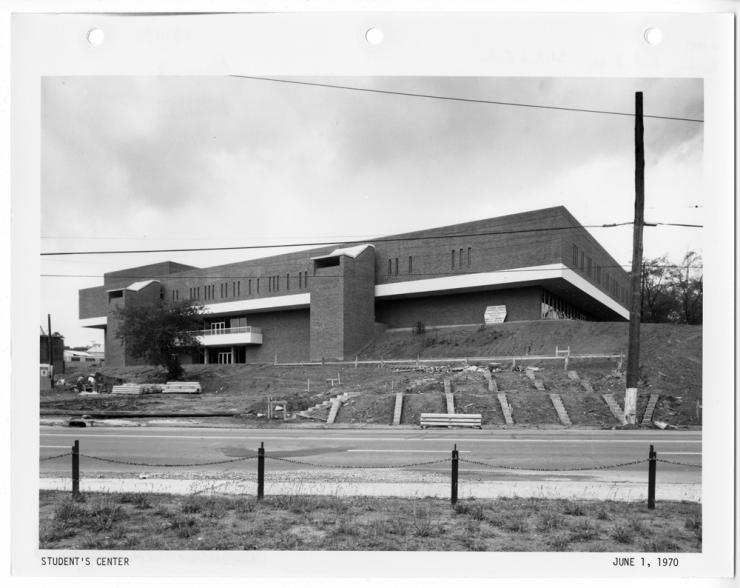 The Original Fred B. Wenn Building

The Georgia Tech Student Center opened its doors in early 1970 as the realization of a dream and much effort on the part of Omicron Delta Kappa, a student honor society. The state‐of‐the-art building, just under 100,000 square feet in size met the needs of the nearly 7,000 students enrolled at that time. Building services included a cafeteria, a music browsing room, Craft Center, ballroom, movie theater, meeting rooms, full‐service Post Office, an art gallery, chapel, table service dining area, and several lounges. Additionally, the original building housed a recreation area with twelve bowling lanes, a billiards room, table games, playing cards, and a video arcade.

To meet the overwhelming demand for lunch in the Food Court, an outdoor patio was enclosed in 1986 to create a 4,000 square foot, 350 seat Greenhouse dining room. In 1987, the Post Office was expanded with a 6,000 square foot addition to accommodate 15,020 mailboxes, nearly doubling the number of boxes previously available. In 1997, the Ballroom was expanded into 1,500 square feet of adjacent storage and patio space and was fully renovated to accommodate larger campus events.

The Olympic Period (1996)
The 1996 Centennial Summer Olympic Games brought a world of attention and media coverage to campus, and the Student Center served as the center of athlete services during the games. Several areas in the building were modified to meet the needs of the 15,000 athletes and the Atlanta Committees for the Olympic Games.

Addition of the Stamps Student Center Commons (2004)
The Stamps Student Center Commons was completed in March of 2004 and was fully occupied and dedicated in August. Services included 4 dining concepts, SGA and Student Involvement Offices, ​6 meeting spaces, numerous lounges, a central performance stage, and retail services. In the Fall of 2010, a new “fast‐food” Food Court in the Commons was built. The new line‐up offered a full‐service Chick‐fil‐A (relocated from the 2nd floor Food Court), Subway, and Panda Express.

Many of Georgia Tech’s most beloved programs and traditions began in the Student Center.

Staring with the building's opening in 1970 and continuing today, many treasured programs, such as Community Service Programs, FASET (Familiarization and Adaptation to the Surroundings and Environs of Tech), ORGT (Outdoor Recreation Georgia Tech), OPTIONS (student run non-credit courses), and GT Edge (peer mentoring program designed to support incoming students), were created by Georgia Tech students. As the Student Center grows, its student-led origins will drive its future.

Staff longevity has been a hallmark of the Student Center with numerous staff ending their careers upon retirement from Georgia Tech. This trend continues as several current staff members have 20+ years of service.